Before we do anything though, something a bit problematic needs to be addressed: Our previous representation of a 2D universe was already tainted by the bias of a 3D being. You can see that to get this view of a 2D universe, our observer (the white sphere) is placed somewhere along a third z axis.

What would this world look like to a 2D being who only had access to 2 dimensions? The answer is actually a bit complicated.

With the way light works in our universe, they would see nothing. A 2D object has no thickness in the 3rd dimension, so perfectly line up with it and there's nothing for light to bounce off of.

Kind of annoying to work around. For now let's just create new laws of physics 😃 Consider an alternate universe where light can bounce off the sides of 2 dimensional objects. In this universe we have a 2D being (the white circle) looking at a pink square. 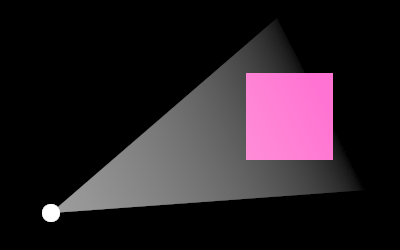 From the being's perspective, all they would see is a simple 1D line!

That may seem strange, but it's completely analogous to our vision as a 3D being. Our eyes only take in 2D images. We don't see in 3D until our brain does a few tricks like combining images from each eye or noticing how fast objects move in relation to each other.

As an interdimensional exercise, let's try the same thing in 2D. This scene will place you in a 2D room with 4 gray walls containing 4 different colored shapes. To simulate depth, parts of the room that are further away will appear darker, as if the room were covered in fog. Your 1D line of vision will be stretched vertically so it’s visible on screen.

See if you can guess what the 4 shapes are by walking around a bit before selecting "Show Overhead Display".

You can learn a lot by questioning the lives of other dimensional beings, but as demonstrated when we broke the laws of physics, it can also get complicated. To make things simpler, let's separate questions about other dimensions into 3 categories:

Most of this website will focus on #3. Here we're free to twist the laws of physics and represent objects in wacky ways as long as it makes an underlying shape easier to understand. That's why in 2D we're safe to imagine a universe where light bounces off 2D objects, and we're even safe to view 2D worlds from a perspective along the z axis. 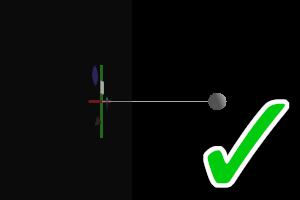