Given a generic radius of length R, a 4D sphere is the set of all points that are R distance away from a fixed center point in 4D space. This is analogous to the points of a circle in 2D space, and the points of a regular sphere in 3D space. 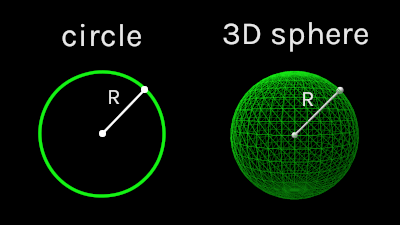 Imagining what this 4D sphere looks like can be difficult, but luckily we've got some new visualization techniques up our sleeves 😎

First let's look at its slices. Slicing 3D objects created 2D slices, so move up a dimension and slicing 4D objects will create 3D slices. In this scene, drag the w slider to move the 4D sphere in and out of our 3D universe:

Does this look familiar?

⚠️ WARNING ⚠️ If you find yourself trying to line up these slices in your head – something like this: 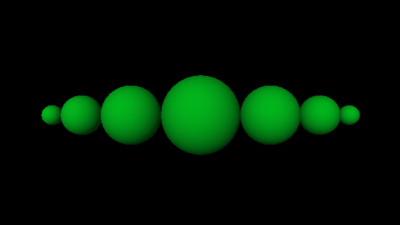 Realize that this is the equivalent of a 2D being trying to form a sphere by lining up circle slices like this: 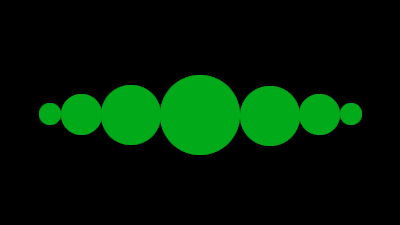 The way I like to think about it is that an entire separate 3D universe exists for each slice. This shows that the 3D sphere slices aren't lined up on any of the 3 axes we're familiar with, and also that none of them are intersecting. The lack of intersection may seem strange, but consider again what happens one dimension lower. At each slice of a 3D sphere an entire 2D universe can be defined, and none of the circular slices intersect each other.

We haven’t had to worry about rotations yet because rotating a 4D sphere doesn't affect the shape of its slice, but slices don't always give the full picture. Let’s see what we can learn from perspective projection.

Keep in mind, an object does not actually change shape during rotation. Points in the 4D sphere that are 2cm away from the center will remain 2cm away as it rotates. The points only appear to move because the projection changes when we look at the object from different orientations.

Rotate on each plane individually with the other planes set to 0°. Notice how each causes a similar transformation where it looks like points are shifting from the outside to the inside.

A similar in and out motion can be seen in the projection of a 3D sphere.

Understanding the exact paths these points are taking can be tricky, but the main takeaway is simply that the points do indeed move during rotation. Take a step back and consider how this affects the slices of a 4D sphere. As you slice a rotating 4D sphere, yes the slice shape stays the same, but the points making up the slice will change. Again, we can see something similar one dimension lower.

As we’ve seen a few times now, this idea of moving down a dimension helps a lot when observing 4D objects. Given some question about a 4D object, my general process to answer it looks like this:

This process can’t answer every question, and it isn’t always easy, but it’s surprisingly effective. This means all we need to do to understand a big chunk of the fourth dimension is get familiar with the slices and projections of other simple 3D and 4D shapes.