So, we've got a basic understanding of the fourth dimension. Now what?

For starters, there's plenty to discover by playing around with the concepts we've already learned. Like did you know rotating a 3D object on a 4D plane allows you to completely flip the 3D object? Rotate this 3D cube to 180° on the ZW plane to see what I mean:

This means if your body rotated through the fourth dimension, you’d come back with your heart on the right side of your body instead of the left O_O A similar flip occurs when rotating a 2D object through the third dimension.

Here’s another pleasing discovery: A being with 4D vision would have a perfect view of everything inside your body. This is equivalent to a 3D human seeing the inside of a solid 2D shape, while a 2D being could only see the shape's boundary. 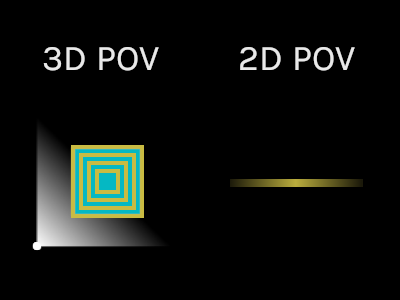 But how would light get inside our bodies? Would the 4D being have a 4D flashlight that could light each atom in our body simultaneously? This is where we can finally start asking about 4D physics and 4D beings.

Like would the being’s eyes detect 3D images and their brain then process them into 4D mental images? What would a 4D shape look like when shaded by a 4D light? Could you get pulled along the w axis by a 4D being? If you could, then what would you see? Remember, asking the equivalent questions for 2D and 3D helps a lot!

Questioning what you already know is a good start, but what if you want to dig even deeper into 4D?

First as a PSA, let me assure you that an expensive VR/3D headset probably isn't necessary. A VR headset makes us better at viewing the 3rd dimension. If you can already use a 2D image to accurately imagine a 3D object, then the headset won’t provide any new information. Now, a VR game with unique ways to interact with 4D, not possible on any other device? That could get interesting.

If you know how to code and want to learn how the 4D shapes on this website work, the source code is available on GitHub.

There are also plenty of other 4D object representations you can find or create yourself. Maybe instead of perspective projection you use stereographic projection. Perhaps you unfold the object into a 3D net. Maybe you represent the 4D object as a series of connected 3D tetrahedron, the same way 3D objects are split up into 2D triangles for computer graphics. 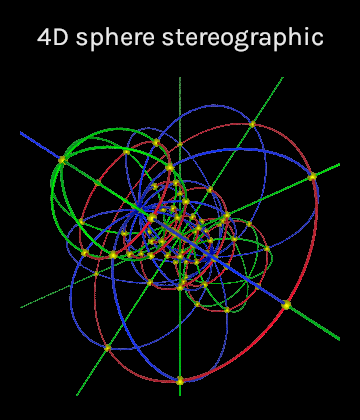 There’s always more to learn, but at this point you've accomplished a lot in 4D! If you remember your basic 4D shapes and to always consider an equivalent 3D/2D scenario, I'd say you’re doing pretty good. Now that you have an extra dimension at your disposal, anything is possible 👽

...Also if you found this website useful please consider donating with the link at the bottom of the page! I believe the content here should remain free, but I’ve put a lot of work into creating it and will continue putting effort into updating and maintaining it. Thank you!