I’d like to point out that this ends up being extremely useful. Whenever something in 4D confuses me, returning to these concepts often provides the most insight.

So what happens when we drag a 3D sphere along the z axis through a 2D universe?

At any given moment, the 2D being can only see the part of the sphere that intersects with their universe. Each intersection, called a "slice", is just a 2D circle of varying size. If you stack these slices together on the z axis you can see the sphere begin to take shape.

An important realization is that while the 2D being can only see one slice at a time, all of these slices actually exist in the object simultaneously, just at different distances on the z axis.

So far things still seem pretty tame – surely a 2D being has seen a circle grow and shrink before. But what happens if we send a 3D cube through there?

This is where things start to get interesting. Now the shape of the slice will vary depending on the rotation of the cube. Moving the cube on the z axis face first just makes a square that suddenly appears, remains still, and suddenly disappears. Edge first you get a rectangle that grows and shrinks. Corner first and you get a combination of triangles and 6 sided shapes (at one point a perfect hexagon!!!)

I’d recommend playing with the cube’s rotation and position for a bit to see what different kinds of slice shapes you can make. This will come in handy later for 4D cubes.

So far we’ve been viewing the slice as a solid shape, but we can squeeze a little more information out of it by focusing on only the edges of the slice.

Notice that each cube face adds at most a single 1D line to the final slice. The highest number of lines in the slice is 6, which means all 6 faces of the cube are intersecting with the plane. Dragging the cube through edge first you can see that while the slice shape seems to transition smoothly, there’s actually a sudden point where one of the lines is completely replaced with another.

Now, lets put your slicing skills to the test and see if you can truly understand the plight of the 2D being. The next scene will show you slices of an invisible 3D object. See if you can determine the object's shape and orientation by rotating and moving it around the scene. Once you have a good guess, select "Show Object" to reveal the object.

One thing worth mentioning is that these slices are a bit simplified because we’ve been working with 3D shapes whose insides are completely solid or completely hollow. Complex objects with a more detailed inside will have a more detailed slice. 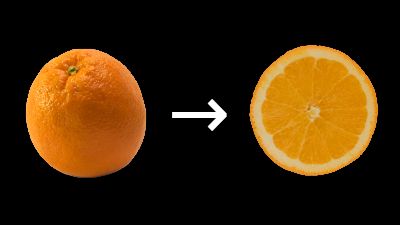